Every Monday, I’ve been co-hosting Medieval Mondays with other Medieval romance authors.  This means you can get a peek at new authors and find out about upcoming books from authors you already love.

Be sure to check in each Monday!

The lastest author is Cathy MacRae, author of The Highlander’s Reluctant Bride. 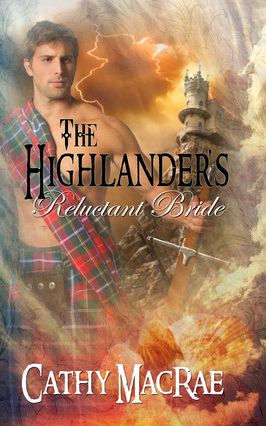 The setting is 1377 and King Robert II is on the throne of Scotland. Though relatively quiet at this point in his reign, the time is still fraught with peril from pirates roaming the western coastline and the English control of much of the Lothians and the border lands to the south. In the first book of the series, The Highlander’s Accidental Bride, King Robert demands the end of a feud between two Highland clans. Though he allows his southern earls to engage in activities to regain their lands from the English, he has less tolerance for Highland clan feuds- especially when they are continually brought to his notice. In The Highlander’s Reluctant Bride, the king responds to a plea for help against the pirates.

Determined to keep the Macrory clan’s holdings out of the clutches of marauding pirates, King Robert II sends his man, Lord Ranald Scott, to hold Scaurness Castle. There, Laird Macrory lays dying, awaiting word from his son who is missing on the battlefields of France. If the son is not found before the old laird dies, Ranald will take over as laird—and marry Laird Macrory’s headstrong daughter.

Lady Caitriona sees no reason she cannot rule the clan in her brother’s stead, and is bitterly disappointed with the king’s decision to send a man to oversee the castle and people. Not only is Ranald Scott only distantly related to the Macrory clan, but he was her childhood nemesis. She has little trust or like for him.

Her disappointment turns to panic when the king’s plan is completely revealed and she realizes she must wed Ranald. Pirates, treachery, and a 4-year-old girl stand between her and Ranald’s chance at happiness. What will it take for them to learn to trust each other and find the love they both deserve?
* * *
Excerpt:

“So, the king forced Eaden to wed,” she murmured. Her gaze caught Ranald’s. “What will he do to me?”

Ranald noted Riona’s sudden pallor, her gray eyes widening until they were naught but huge silver orbs glowing against her skin. Now was as good a time as any to tell her what King Robert intended for her, but he could not force the words.

“Ye are a laird’s daughter,” he reminded her. “And an heiress. Yer mother’s dower lands north of here are of great value to the king.”

“And I am of little worth, aye?” Riona flared.

Ranald sighed. This was not going as he planned. “We are all pawns in one way or another, Ree. The king willnae let ye stay on yer own. Ye are a ward of the crown, now.”

“So, he’ll marry me off to some rebellious laird he wants to drag over to his side, using me and my lands to hold him?”

“Mayhap to a wealthy laird who’s all but doddering in his cups, hoping I’ll no’ breed an heir before he dies, giving title of the land to the king and my next husband?”

Ranald lifted an eyebrow. The lass was getting worked up over nothing. “Marriage, yes. Doddering auld man, no.”

Riona snapped her head to one side, a glower on her face. “Then, who?”

I love to hear from readers!

Thanks for checking out this new series of posts! What is your favorite Medieval place/time?