Llys Rhosyr is the only excavated palace of the Welsh princes in Wales. A llys (the term used for a high status Welsh secular site) stood at Rhosyr on Anglesey, and was excavated by the Gwynedd Archaeological Trust. At least three major buildings have been found, in addition to other ancillary structures; a well preserved perimeter wall also exists.

Llys Rhosyr, in particular, was a royal court of the native kings and princes of Wales, perhaps for centuries. Before Gwynedd was conquered by the English, the kingdom was divided into 22 administrative areas, each housing a royal township. One of these was known to have existed at Rhosyr. According to Neil Johnstone, the archaeologist who discovered it: “There can only be one high-status dwelling on the royal estate, and it belonged to the Prince”.

After the death of Llywelyn and the fall of Wales, the llys at Rhosyr was dismantled and became derelict. 18th century Antiquaries mentioned seeing the sand-covered, ruined walls at Rhosyr, but by 1900, nothing survived to be seen of the llys except the name of the field in which it once stood – cae llys (“field of the court”). The story goes that Johnstone was searching the area for where the llys might be, when a farmer mentioned the name. The local people had continued to use it, even 800 years after Llywelyn’s death.

The Gwynedd Archaeological Trust has excavated a quarter of the site, which can be visited today. In that small section, they uncovered a well preserved perimeter wall and at least three major buildings, one of which is a large hall with an off center hearth and an attached range of rooms. This hall is equal in size to the largest previously known hall in Gwynedd, the Bishop of Bangor’s residence in Llandudno. Despite the layout being similar to contemporary English halls, the Rhosyr excavations seem to suggest that the Princes lived what Johnstone calls “a curiously un-luxurious lifestyle”.

2 Replies to “Llys Rhosyr (Palace of the Princes)” 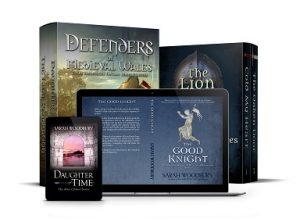