One of the most interesting scenes in Ridley Scott’s Robin Hood (see my review:  http://www.sarahwoodbury.com/robin-hood-review-spoilers/) is when Robin first arrives at Marian’s house and she sends him to the bath room. It’s a room off the kitchen, devoted to bathing and laundry. I LOVED to see that scene because it was one of the few times that medieval bathing was openly acknowledged in film.

“Contrary to popular legend, medieval man loved baths. People probably bathed more than they did in the 19th century, says the great medievalist Lynn Thorndike. Some castles had a special room beside the kitchen where the ladies might bathe sociably in parties. Hot water, sometimes with perfume or rose leaves, was brought to the lord in the bedchamber and poured into a tub shaped like a half-barrel and containing a stool, so that the occupant could sit and soak long. In the cities there were public baths, or “stews” for the populace.

Soap was probably invented in the Orient and brought to the West early in the Middle Ages. This was a soft soap without much detergent power. Generally it was made in the manorial workshops, of accumulated mutton fat, wood ash or potash, and natural soda. Laundresses might also use a solution of lye and fuller’s earth or white clay. They worked usually by streamside, rhythmically beating the material with wooden paddles. After the winter’s freeze they had a great spring washing of the accumulations. It was on such an occasion in the Merry Wives of Windsor that Falstaff hid in the laundry basket. Hard soaps appeared in the 12th century. They were luxury articles, made of olive oil, soda, and a little lime, often with aromatic herbs. They were manufactured in the olive-growing south, especially Spain; hence the modern Castile soap.”   http://www.godecookery.com/mtales/mtales08.htm

“Like the nonsensical idea that spices were used to disguise the taste of rotten meat, the idea that bathing was forbidden and/or wiped out between the fall of Rome and the Enlightenment has been touted by many gullible writers, including Smithsonian magazine. However, even the Smithsonian in the person of Jay Stuller has to admit that “Gregory the Great, the first monk to become pope, allowed Sunday baths and even commended them, so long as they didn’t become a ‘time-wasting luxury’ . . . medieval nobility routinely washed their hands before and after meals. Etiquette guides of the age insisted that teeth, face and hands be cleaned each morning. Shallow basins and water jugs for washing hair were found in most manor houses, as was the occasional communal tub…” http://www.gallowglass.org/jadwiga/herbs/baths.html

The above link extensively catalogs the use of baths through medieval Europe, as attested by people writing at the time.

“People of the Middle Ages are known to have bathed more often than any of their descendants up to the 19th century. It was common for hosts and guests to share the experience. 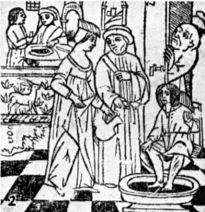 Portable wooden tubs lined and padded with cloth and cushions are much associated with this period but it was not unknown for royal bathrooms to contain the type of bath we know today, cased in, set on a tiled floor and with bath mats surrounding it.

King John only bathed once every three weeks but he may have followed a similar regime to Edward IV whose household accounts show that his barbour was paid 2 loaves and a pitcher of wine every Saturday night ‘if it please the Kinge, to cleanse his head, legges or feet, and for his shaving…‘

One of the practises hitherto unknown that the Crusaders brought back with them from the Middle East concerned public bath houses. The Stews. Under Richard II there were 18 stews in the Southwark region of London alone. Young boys were often seen running through the streets shouting out that the water was now hot. The baths were open for business.” http://www.triviumpublishing.com/articles/smellofthemiddleages.html

The myth that medieval people didn’t bathe is traceable to later behavior and fears, and that the Church viewed it as an indulgance:  “Bathing may have actually become less common among the wealthy as the middle ages became the Renaissance, as people began to think that bathing might unbalance the humors and lead to illness. But certainly people like Isabella of Castile–who boasted that she had only ever bathed twice: on the day she was born and the day she married–were still in the minority.

The reason why Isabella’s boast has come down through history is because, at the time, it was just that–a boast–something which was out of the ordinary. Even if some people were cutting back on their bathing, it was very unusual that anyone would bathe that infrequently. Isabella boasted of this because she saw it as an act of piety. Bathing was an indulgence of the flesh; abstaining was a pious act–just like flogging yourself or wearing a hair shirt. Medieval people liked bathing; that’s why some of them stopped doing it in a fit of religiousness.”  http://keripeardon.wordpress.com/2012/06/14/bathing-in-the-middle-ages/

It was also associated with Jews and Muslims, so it’s possible that Isabella’s boast was a product of the Inquisition and the desire to distinguish herself from these religious groups.

6 Replies to “Did Medieval People Bathe?”