Finally … the word is in:

“A skeleton found beneath a Leicester car park has been confirmed as that of English king Richard III.

Experts from the University of Leicester said DNA from the bones matched that of descendants of the monarch’s family.

Lead archaeologist Richard Buckley, from the University of Leicester, told a press conference to applause: “Beyond reasonable doubt it’s Richard.”

Richard, killed in battle in 1485, will be reinterred in Leicester Cathedral.

Mr Buckley said the bones had been subjected to “rigorous academic study” and had been carbon dated to a period from 1455-1540.

Dr Jo Appleby, an osteo-archaeologist from the university’s School of Archaeology and Ancient History, revealed the bones were of a man in his late 20s or early 30s. Richard was 32 when he died.

His skeleton had suffered 10 injuries, including eight to the skull, at around the time of death. Two of the skull wounds were potentially fatal.

One was a “slice” removing a flap of bone, the other was caused by bladed weapon which went through and hit the opposite side of the skull – a depth of more than 10cm (4ins).

Dr Appleby said: “Both of these injuries would have caused an almost instant loss of consciousness and death would have followed quickly afterwards.

Who was Richard III? 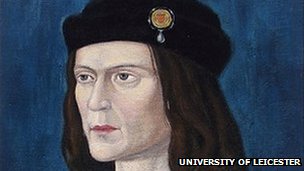 “In the case of the larger wound, if the blade had penetrated 7 cm into the brain, which we cannot determine from the bones, death would have been instantaneous.”

Other wounds included slashes or stabs to the face and the side of the head. There was also evidence of “humiliation” injuries, including a pelvic wound likely to have been caused by an upward thrust of a weapon, through the buttock.

Richard III was portrayed as deformed by some Tudor historians and indeed the skeleton’s spine is badly curved, a condition known as scoliosis.”

However, there was no trace of a withered arm or other abnormalities described in the more extreme characterisations of the king.”

For the US version: